scroll down for english 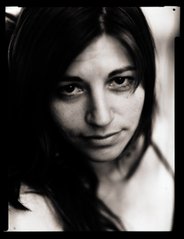 scroll up for swedish

Linda was born in 1976 and was brought up in a small village named Kröcklinge, in the county of Västmanlad in Sweden.

Linda used to live in Florence in Italy with her husband Farigh who is an artist and they continously travel to Florence as much as possible. They now live in Enskede, Stockholm.

Her interest in existence started early and Linda's father gave her a stargazer after finding her night after night looking in admiration to the moon instead of sleeping.

Despite the fact that she by the age of 4 declared that she did not believe in God or Godiva (Gods presumed wire), after a visit in the Sunday school for children, she did complete a course in theology at the university regarding existential rooms in literature, culture and religion. She also studied Creative writing and philosophy at the university and also at the author lead academy for writers, in Stockholm

"All of this together has given me a greater understanding of humans in their nicest and most lost self."

Thoughts about injustices in the world, about existence, of the stars and a constant longing to find home has brought her to the corners of the world. She also enjoy to travel alone, preferably by motorcycle and sleep under the stars.